Key features of the giraffe

Number of young per litter: 1

The species are split into 9 subspecies for Girafa camelopardalis (a 2016 genetic study suggests only 6 species): 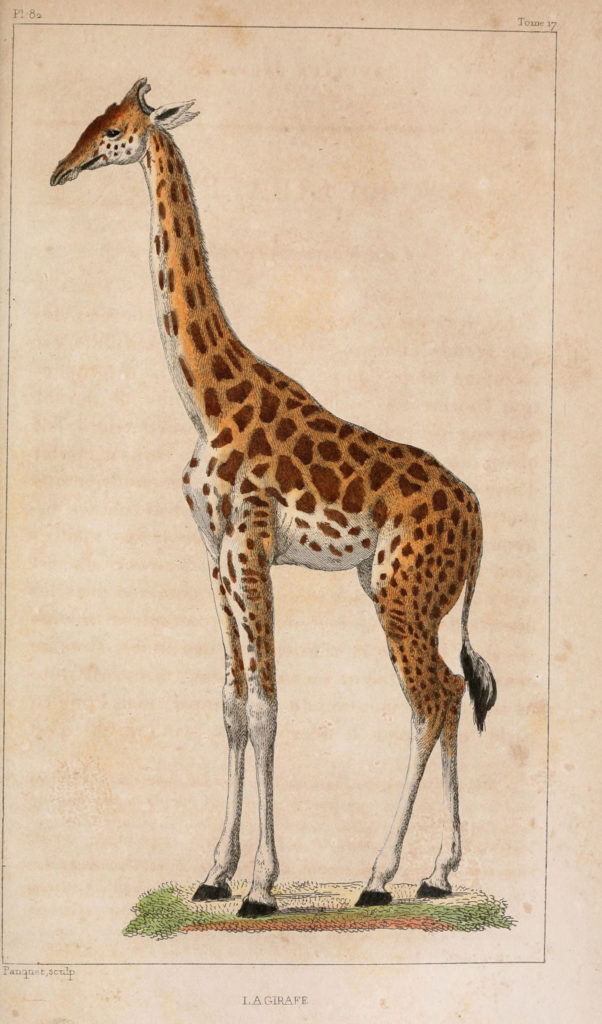 « Giraffe »  originated in Arabic « Zarâfah ».  « Camelopardalus » comes from Latin «Camelus»  for the giraffes elongated neck (like a camel) and «Pardalis» for spots (like a leopard).

It all began 20 million years ago (in the Upper Miocene). This family of animals called giraffe probably had a common ancestor with the bovine family since they are both ruminants. Coming from the Indian subcontinent, they arrived in Africa around 6 to 7 million years ago. Giraffes appear to have been successful until fairly recent times.

Today there are only 2 species left the African Giraffe (Giraffa camelopardalis) and the Okapi (Okapia Johnstoni).

Giraffe are the largest of the land animals.Their spots are their identity card. At birth, the spots  are smaller. The shape will remain the same however the spots will grow as well as the spaces between them. The color of the spots darken with age.Both sexes have horns, more developed and thicker in the male. The giraffe is the only mammal that is born with these horns which are cartilage, and they are already present in the womb.

The horns are covered with skin and the top is covered in black hairs. In males, these hairs become less visible with age, the top becoming bald and shiny due to fighting.

The giraffe walks gracefully (it advances the front and rear legs on the same side at the same time) like a camel or a bear. The neck, thanks to the muscle pulling it forward, serves as a pendulum to balance the body when moving. Its speed goes from 15 to 55Km/h. 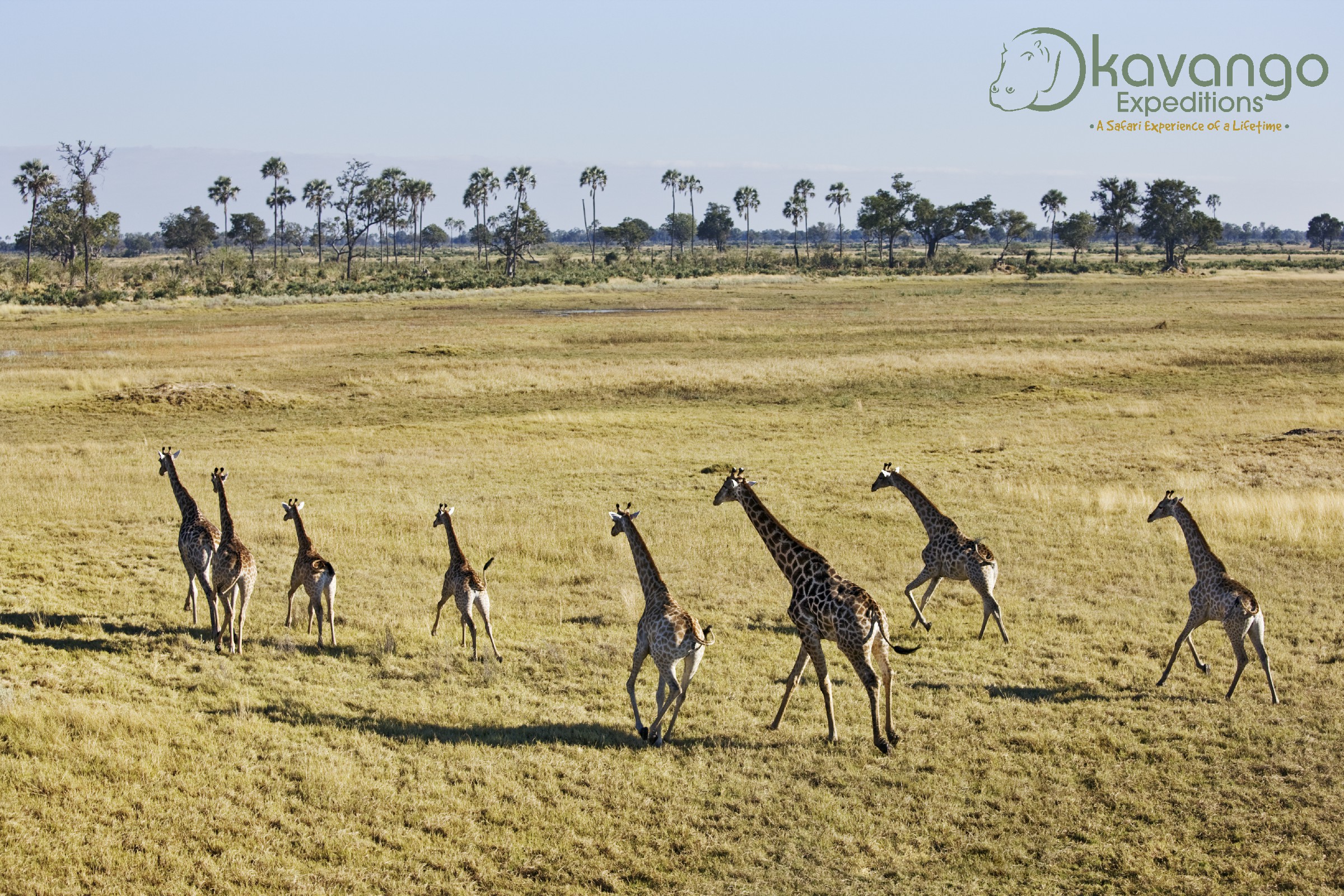 The blood circulation and breathing are proportionate with its size and are wonders of nature. 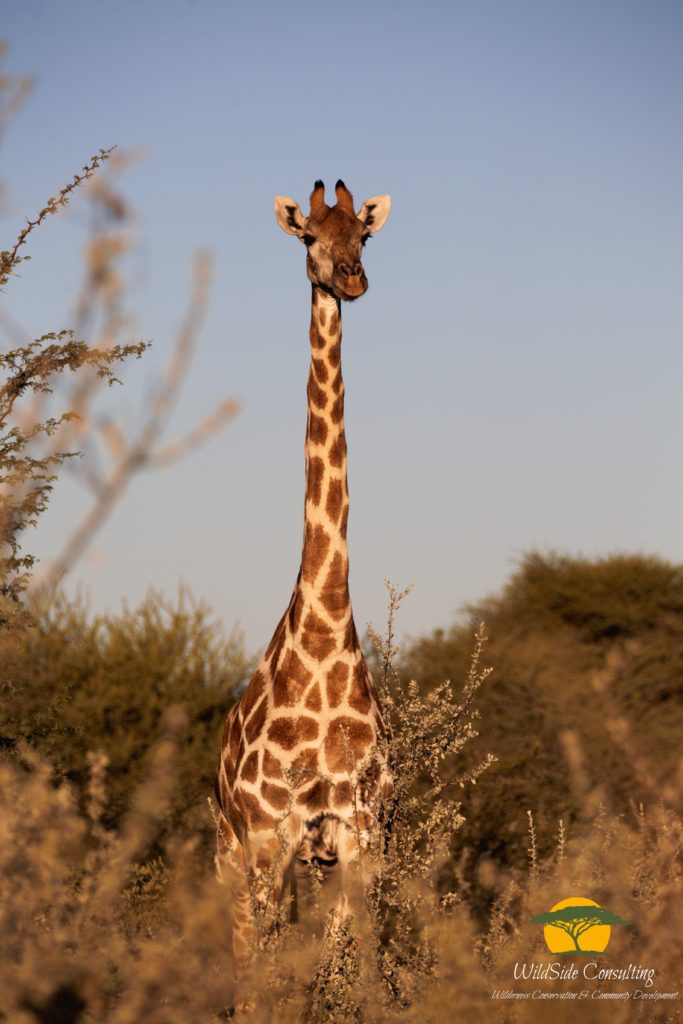 Beautiful and slim, a giraffe in the Botswana bush

Due to the proportions of its neck, the giraffe has a unique blood system. The giraffe’s heart weighs 11kg (2% of its weight compared to 0.5% in humans or cows).

The heart has a strengthened myocardium and an exceptionally large left ventricle. It pumps 60 liters of blood and beats at 170 pulses per minute, which gives the giraffe a blood pressure twice that of humans. It permanently supplies the brain and has to pump blood to the top of its long neck.

In order to avoid too much blood being pumped to the brain, the giraffe has large network of very spongy vessels  at the base of the skull which is capable of diverting and slowing the flow of blood, allowing the giraffe to bend without problems.

The giraffe’s blood system was studied by phlebologists from NASA to create the anti-G suits for pilots and astronauts.

The breathing rate of the giraffe is 1.5 times faster than in humans. Its trachea, about 5cm in diameter, is more than 2 meters long.

Their eyes are quite large and they have excellent eyesight. Their hearing is also very good, with ears that move independently of each other. Their smell is not quite so developed.Giraffe are ruminant’s and have a stomach with 4 compartments, it spends about a third of its time ruminating. They feed mainly on leaves and also eat flowers, pods and fruit. Their main food comes from acacias, however more than 100 plants are present in a giraffe’s diet.Their consumption of foliage is around 34 kg per day (up to 66 kg for an adult male giraffe). 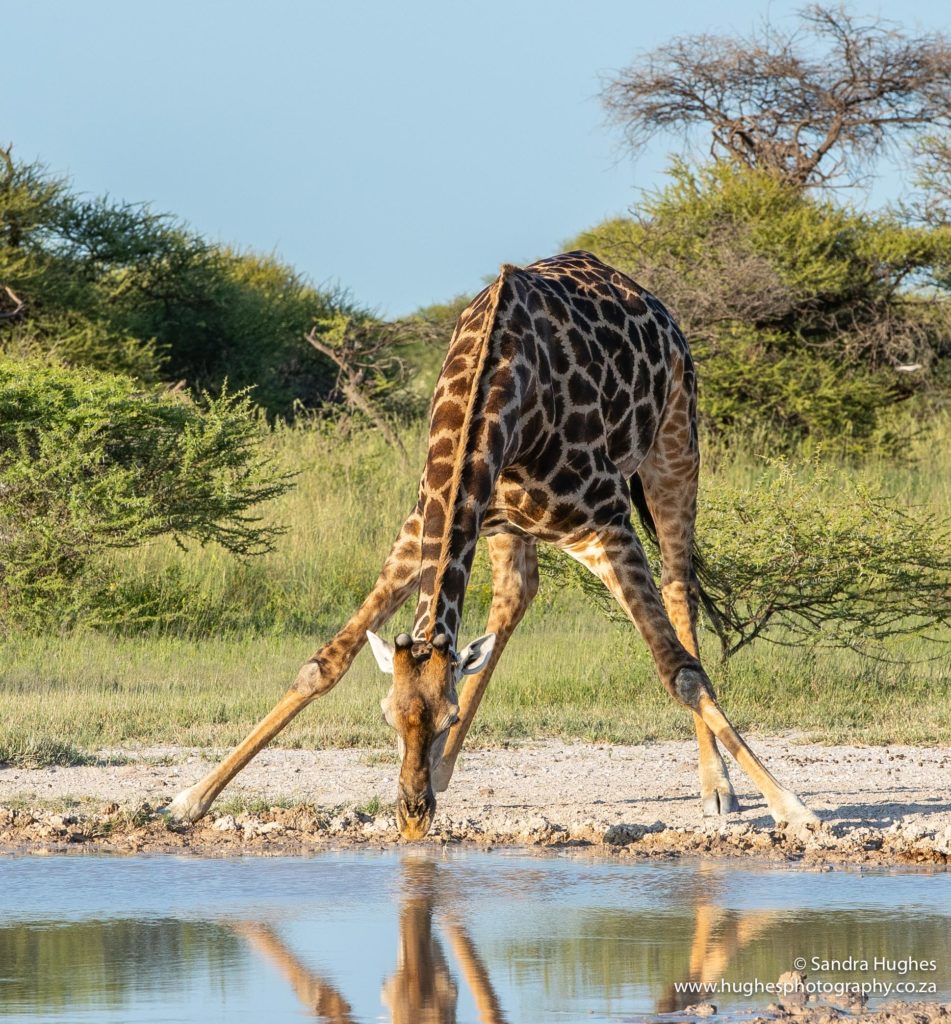 Drinking giraffe with her speific posture.

Thanks to their grasping tongue, the most powerful, toughest and longest (55 cm) among the ungulates and with a very mobile upper lip, they collect the flowers and leaves on trees favouring the Acacia. Their tongue is blue-black in colour which protects it from UV light.  Its saliva has antiseptic properties to protect the tongue from the thorns present on some leaves. Giraffes sometimes suck and chew bones for an additional supply of calcium and phosphorus (especially in the dry season). They also consume mineral salts from the soil.

When feeding or drinking on the ground, giraffe spread their front legs or bend their knees.

Quite gregarious, the giraffe lives in social groups that are always on the move and are unstructured. Their number in the group (or journey which is their collective noun) is constantly changing depending on other giraffes they meet on their travels. These groups are commonly from 10 to 20 giraffe’s – but up to 70 giraffes have been observed together.After giving birth, the females and their young gather in groups, keeping a lookout to defend against predators. Giraffe are not territorial.Giraffes are not mute as they have vocal cords. They can emit infrasound (92Htz), snoring, moaning or even hissing when stressed. Giraffe communicate by signs, and by touching and chemical means emitting faint or strong foul smells. These come from the sebaceous glands located at the base of the hair and in the animal’s skin and are made up of 10 different compounds.

In young immature males, necking is the rubbing and interweaving of necks, however in adults these fights can be very violent, resulting in injuries or falls.

Males thrust their heads like a hammer. With age, the skull of the male giraffe becomes denser and larger making it a formidable weapon. The blows are aimed anywhere and the fight continues until one of the two rivals admits defeat or moves away. These fights are intended to assert their domination and thus allow the winner access to the females.Giraffes sleep very little, less than 2 hours per day, often during daytime, because they can continue to scan their environment. In reality, they doze standing up, eyes wide open and for periods ranging from 1 to 30 minutes at a time.

The giraffe reaches its sexual maturity at the age of 4 to 5 years in males and 3 to 4 years in females.  Females remain fertile until approximately 20 years old. During this period, females are receptive every 15 days. Males test the urine of the females to find out about their sexual receptivity. Giraffes wait 20 to 30 months between giving birth with new borns. A giraffe can give birth a dozen times during its lifetime. The life of a newborn giraffe begins with a fall of 2.5 meters during birth from its mother. A newborn giraffe weighs 50 to 70 kg and is 2 metres in height. It is born with its neck folded along its body, which limits the risk of injury during this fall at birth. During birth the female slightly bends her legs to absorb the fall.The newborn giraffe are on their legs in less than an hour after birth and are quickly able to run to follow their mother.Young giraffe grow about 3 cm per day and are weaned around the age of 12 to 16 months.About 50% of newborns are victims of predators, lions and hyenas.

Predators of the Giraffe

The main predators of the giraffe are lions and hyenas.Girffes large size, good eyesight, speed and large hooves make them difficult prey. However, the giraffe is vulnerable when it drinks.In the event of an attack, it defends itself from predators by kicking.  When they are with their young, they gather in open spaces.At the sight of a predator,  giraffes “stop” and all look in the same direction. A horizontal tail is a sign of anxiety.

Conservation of the species

Bring hunted & poached giraffes are under strong pressure which reduces their territory. Giraffes are threatened in all of the areas they occupy. In 30 years, 40% of giraffes have disappeared on the African continent according to a National Geographic study published in 2019. On August 22, 2019, CITES acknowledged that the survival of giraffes was threatened and added it to the Index II of endangered species.

Join us on a mobile safari to discvover the Botswana giraffes, from the Okavango Delta to the Kalahari.